In math our Teacher asked us if we can choose a graph and make a story about it. There were three graphs. I picked the first graphg
. 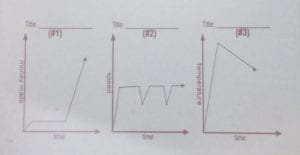